Vancouver-born author, poet, artist and activist Lee Maracle graces the cover of Quill & Quire’s November issue as part of their spotlight on aboriginal publishing. One of the first aboriginal writers to have fiction published in Canada, Maracle discusses her new novel, Celia’s Song, and its strong connection to her 1993 novel, Ravensong, proudly published by Women’s Press.

Set along the Pacific Northwest Coast in the 1950s, Ravensong tells the story of an urban First Nations community devastated by an influenza epidemic. Stacey, a 17-year-old Native girl, struggles with the clash between white society’s values and her family’s traditional ways, knowing that her future lies somewhere in between. Celia, her sister, has visions from the past, while Raven warns of an impending catastrophe before there is any reconciliation between the two cultures.

Celia’s Song revisits many characters from Ravensong and follows multiple generations of a Nuu-chah-nulth family through misfortune and hardships.

In the Q&A, Maracle also touches upon how she came into writing, how her culture influences her work, and how Ravensong was born out of a three-day novel writing contest. Ravensong is available from Women’s Press. 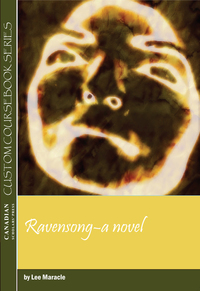